Deep in southeast Pakistan, in Sindh province, is Larkana District. Sitting along the historic Indus River, Larkana is known as the “city of holy Alams” — or “holy shrines.” It’s perhaps most famous for housing Mohenjo Daro, an archeological site that dates back to 2500 B.C. and is considered one of the world’s oldest major cities. It’s also the hometown of one of Pakistan’s most powerful political dynasties — the Bhutto family — which has produced two prime ministers and continues to dominate large sections of the country’s political scene. Recently, however, Larkana district has made headlines for a much darker reason: an HIV outbreak that has affected over 950 people, at least 784 of whom are children. The numbers continue to rise, as residents are still getting tested.

A 30-minute drive from Larkana’s main city will bring you to Ratodero, a small, multi-ethnic town largely comprised of the lowest socio-economic segments of the country. The poverty-stricken area is represented in the National Assembly by Bilawal Bhutto Zardari, an Oxford graduate and the son of former Prime Minister Benazir Bhutto.

Ratodero is in panic mode: hundreds of parents were regular visitors of the clinic of an HIV-positive doctor who is accused of spreading the infection to thousands of unsuspecting men, women and children.

“Everyone from my village is getting tested and I thought of getting my son tested, too. I had taken my son to the same doctor.”

As of this filing, 32,685 people had been screened, with 957 of them testing positive for HIV, according to the director general of Sindh Health Services. The outbreak is unprecedented because it involves the general public — predominantly young children — who do not fall under the high-risk group for the deadly viral infection. Moreover, many of the children who tested positive do not have HIV-positive parents.

Charging 30 Pakistani rupees (or $0.18 USD) per patient, the accused doctor was the number one choice for many parents because he “paid attention to their children” and — perhaps more importantly — was “not expensive.” Anemia, pneumonia, diarrhea, persistent fever and cough were just some of the ailments that took the poor and, in some cases, well-to-do patients to him. Moreover, he was the only doctor listed as a pediatrician at Ratodero’s main hospital.

It took seven deaths — the youngest victim just seven months old — and a brave father’s use of social media to highlight Ratodero’s HIV/AIDS outbreak. What has happened in Larkana has since grabbed the attention of national and international media. The doctor was arrested, and a technical team submitted a detailed report to federal investigators in charge of the case. 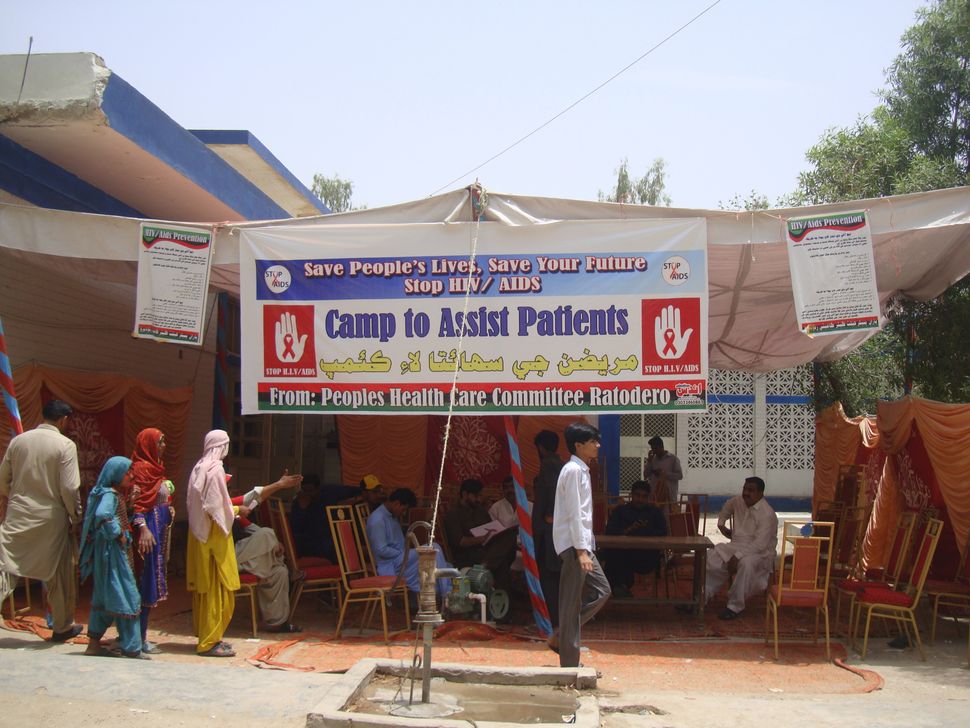 Sumaira Jajja/Dawn A screening camp in Ratodero. HIV test kits, with results available within 30 minutes, are administered free of charge.

The drive to get Larkana tested

An HIV-screening camp has been set up in Larkana’s dusty, minimally-equipped and understaffed Taluka Headquarter Hospital. Hundreds of people are in line to get voluntarily tested after reports of the outbreak made national news. The Sindh AIDS Control Program, or SACP, undertook a mobilization campaign with the help of provincial health departments and local representatives of political parties to get people tested. HIV test kits, with results available in under 30 minutes, are administered free of charge.

A young father stands clutching the lab report of his two-year-old son in one hand and protectively holding the boy in the other, and looking visibly upset. “Everyone from my village is getting tested and I thought of getting my son tested, too,” he says. “I had taken my son to the same doctor. Since his arrest I have been very upset and took my son for an HIV test.” The test, taken at the lab of a nonprofit working with local authorities, confirmed the boy was HIV-positive. “I want to reconfirm this,” he says. After an agonizing wait of some 40 minutes, the test also comes back positive. The staff guides him to take his son to Larkana’s main city, assuring him the boy would be fine once treatment begins. “He will go on to have a wife and kids,” says a volunteer, trying to reassure the father.

Hussain, a barber and a father of nine, says his five-year-old son tested positive for HIV. “I found out some seven months ago after I took my wife and son to the doctor’s. The two had been ill for months,” he says. His wife was given a blood transfusion. The man who donated his blood was a family acquaintance.

After months of illness, his wife tested positive for HIV. “[The doctor] told me to find the man who donated the blood, saying his life may be in danger. When we went to his house, we found out he had passed away last year due to a protracted illness.” Since then, the deceased’s family has been tested for the infection. They were safe from the life-threatening disease but not from community backlash.

Meanwhile, Hussain’s test came back negative. Though his family never visited the accused doctor, Hussain says the government must take notice and hold everyone involved accountable, including blood banks.

Sumaira Jajja/Dawn A woman carries her malnourished baby while waiting for her turn to see HIV experts at the Chandka Medical Hospital, Larkana.

The case of the accused doctor is not as cut and dried as presented by local media. Though the findings of the federal technical team are not public, infectious disease experts conjecture that the current outbreak is “multifactorial.” Experts warn it might be unfair to make one man a scapegoat for an epidemic that may have spiraled out of control due to poor infection control practices and general apathy from the government.

According to a UNAIDS 2017 factsheet, Pakistan is home to an estimated 165,000 HIV-positive people, with some 3,500 under the age of 14. 22,000 Pakistanis living with HIV know of their status while only 12,000 are currently on antiretroviral therapy (ART). National and provincial AIDS control programs say the actual numbers of people with HIV is likely much higher.

Since Pakistan’s first reported case of HIV in 1987, the epidemic took root mainly in high-risk populations — drug users and sex workers — as well as migrant workers in the Gulf deported back to Pakistan once their HIV-positive status was known. A poor health care system and social stigma made talking about HIV a taboo, however.

A 2014 report from the Journal of the Pakistan Medical Association warned that Larkana had all the ingredients of an exploding HIV epidemic in the near or distant future.

The HIV epidemic in Larkana district is also not new. The first HIV case reported there was in 1995. Eight years later, in 2003, the city garnered attention when the first outbreak of HIV among injecting drug users (IDUs) was reported. Out of 175 IDUs, 17 were confirmed positive.

A 2014 report from the Journal of the Pakistan Medical Association warned that Larkana had all the ingredients of an exploding HIV epidemic in the near or distant future. That prediction came true in 2016, when an outbreak skyrocketed the number of HIV-positive people in the district, surpassing the 1,200 mark. With HIV present in a high-risk population for almost two decades, combined with unregulated blood banks, the rampant reuse of unsterile syringes, rudimentary healthcare facilities, poor infection control practices and untrained healthcare workers, the infection finally made its way to the general public.

“HIV/AIDS was never considered an emergency or a big issue,” says Dr. Sikandar Memon, program manager of the Sindh AIDS Control Programme, or SACP. “This is a very small program going nowhere. When there are so many unsafe practices all over the country, anywhere you test you will end up getting some HIV-positive people.”

Infectious diseases experts say that the outbreak could have been prevented had proper safeguards been in place. “You have a population which is vulnerable, faces poverty, illiteracy, malnutrition and now has a chronic illness,” one expert noted.

“The government needs to focus on why the situation got out of control. The people have poor understanding of the disease and treatment could be jeopardised. The efforts shouldn’t just stop at screening,” says Dr. Bushra Jamil, head of Infectious Diseases at Aga Khan University in Pakistan’s largest city, Karachi.

“How can we ensure that lifelong treatment is religiously followed? The virus becomes resistant if treatment is interrupted and then becomes difficult to treat.”

Meanwhile, SACP’s Dr. Memon stresses that HIV-positive adults and children can go on to live “healthy, happy lives” as long as they follow the ART regimen religiously. “These children will grow up to be fine adults, with no complications. They can work full time and marry and contribute positively to the society.” The key, he stresses, is to “ensure these men, women and children take the medicines regularly”.

Dr. Jamil is not so sure. “How can we ensure that lifelong treatment is religiously followed? The virus becomes resistant if treatment is interrupted and then becomes difficult to treat.” She urged the provincial and federal government to increase awareness about not giving unnecessary injections (unless life-saving) to infants and children. “There is a need to maintain strict safety and hygiene protocols and availability of screened blood for transfusions,” she added.

The results of the epidemiological investigation into the HIV outbreak in Ratodero will be available in a few months and will eventually allow the government and all stakeholders to come up with a long-term strategy. So far, the patients declared HIV-positive after screening are being interviewed and details are being collected to better understand the factors that led to the infections. Most cases, it seems, were the result of reused syringes and needles, followed by unsafe blood transfusions.

The SACP and the Sindh Health Department have yet to make a prediction about the number of cases they will be dealing with in the near future, at a time when some dozen people are being added to the list on a daily basis. Following a visit by Bilawal to the screening camp, the Sindh government has approved 1 billion Pakistani rupees — roughly $6.3 million USD — in assistance for HIV/AIDS infected residents.

However, at this critical juncture, the Sindh government must ensure the availability of safe blood, sterile syringes and proper medical waste disposal mechanisms while ensuring that medical requirements of the affected are taken care of and privacy of all individuals caught in this crisis is respected.

A version of this story was originally published in Pakistan’s Dawn Newspaper.