Doctors said a London man with HIV has become the second known adult in the world to be apparently cleared of the infection since the global epidemic began decades ago, giving hope for a potential cure for AIDS.

Doctors said that recent tests showed no trace of the man’s previous HIV infection. The milestone came about three years after the man received bone marrow stem cells from an HIV-resistant donor and about a year and a half after coming off antiretroviral drugs. The patient was receiving the bone marrow transplant for cancer.

The case offers hope that researchers will soon find a cure for AIDS. But doctors cautioned against calling the patient’s results a cure for HIV, the virus that causes AIDS.

Ravindra Gupta, an HIV biologist who helped treat the man, told Reuters that his patient is “in remission” but warned that it’s “too early to say he’s cured.”

The man has chosen to remain anonymous, with scientists referring to him as “the London patient.” The title is similar to the first known case of a cured HIV-positive patient. Timothy Brown, an American man, was known as “the Berlin patient” when he also received a bone marrow transplant for leukemia treatment in Germany 12 years ago. That transplant also appeared to clear his HIV infection. 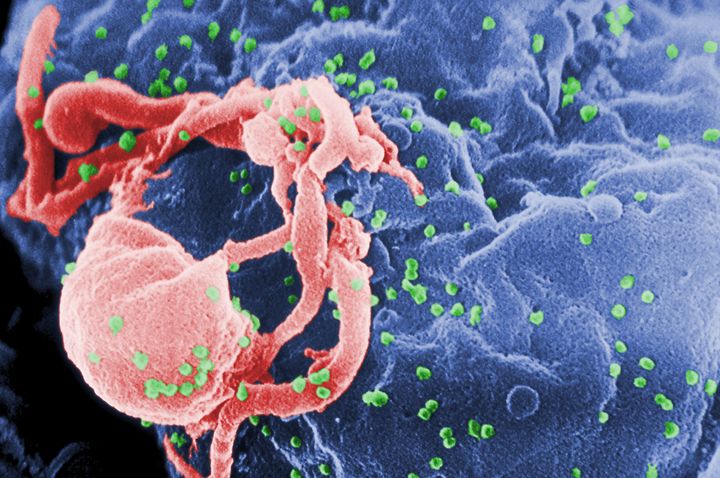 Cynthia Goldsmith/Centers for Disease Control and Prevention via AP A scanning electron micrograph of multiple round bumps of the HIV-1 virus on a cell surface.

After Brown’s case, scientists tried for 12 years to copy the result with other HIV-positive cancer patients. The London patient, who had Hodgkin’s lymphoma, is the first adult to be cleared of HIV since Brown.

The decades-long HIV epidemic still persists in the United States and worldwide, with nearly 39,000 new diagnoses in the country in 2017. About 37 million people worldwide currently have HIV, and the AIDS virus has killed about 35 million since taking off in the 1980s.

Scientists who have studied the London patient are expected to publish a report Tuesday in the journal Nature. They also plan to present details in Seattle at the Conference on Retroviruses and Opportunistic Infections, which began Monday.

Bone marrow transplants as an HIV cure is a treatment with harsh side effects, but The New York Times reported that scientists think giving patients similar HIV-resistant immune cells might do the trick.

“This will inspire people that cure is not a dream,” Dr. Annemarie Wensing, a virologist at University Medical Center Utrecht, told the Times. “It’s reachable.”